Read OPM’s latest blog by our Chief Economist, Mark Henstridge, discussing a new paper on the imact of COVID-19 on low- and middle-income countries

Different countries have experienced the COVID-19 pandemic differently. The data collated by Johns Hopkins University and the European Centre for Disease Control show that rates of infection and death reported around the world have varied enormously from the earliest known days that the pandemic hit, especially in Asia and sub-Saharan Africa.

Figure 1 shows the progress of daily cases and cumulative daily cases per 100,000 of the population since early March, and from the point that the pandemic reached the same number of daily cases for a range of Asian and sub-Saharan African countries, together with five OECD countries, as at late April. 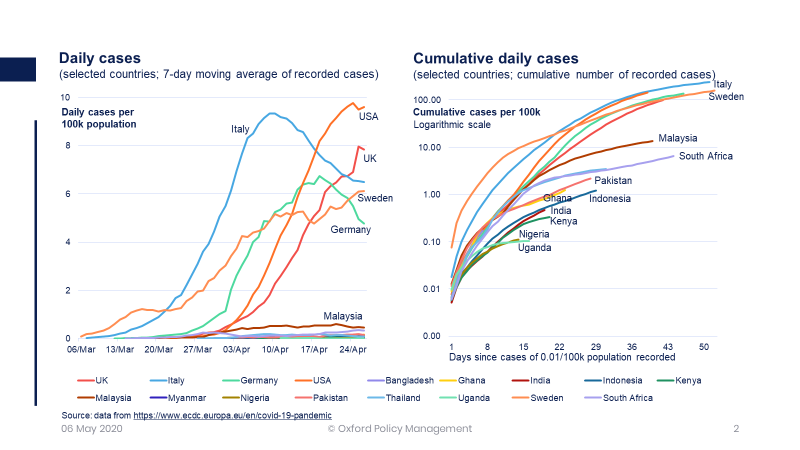 Figure 2 shows the data on cumulative recorded deaths from COVID-19, both against the calendar from early March, and against the same point in time that the virus was recorded as causing deaths. Unsurprisingly, a similar pattern of enormous variation is clear. 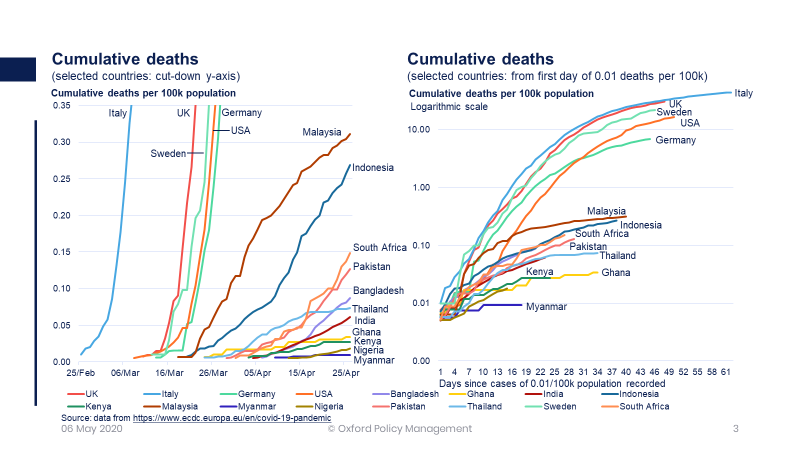 One reason that the data vary across countries is that different countries have taken different approaches to testing for infections and recording deaths. Some have tested more than others – such as Germany compared to the UK – and countries vary in their testing protocols. It is likely that all countries are under-recording cases and deaths, and probably to differing extents.

There is a range of possible reasons why the pandemic has a differing impact across countries – over and above problems with the data. For example, COVID-19 is most risky for older people. That means fewer deaths in young populations. In Italy, 22.8 per cent of the population, which is 13.7 million people, are over the age of 65. In Uganda, 1.8 per cent of the population are over the age of 65, which is 0.8 million people: just 6 percent of the number of people in that age range in Italy. The risks of being killed by the pandemic based solely on age are correspondingly much lower in Uganda than in Italy.

At the same time that the virus has arrived at differing times and intensities in different countries, the response has been very uniform: a lock-down. During the second and third week of March, most countries went into lock-down. Figure 3 shows the state of the world gauged by ‘government response stringency index’ collated by the Blavatnik School of Government as at late April. 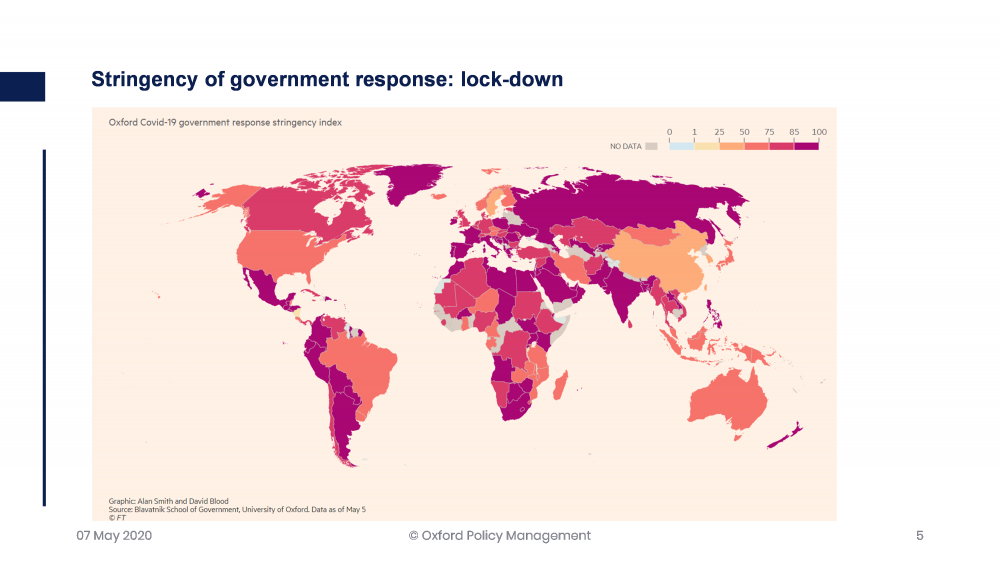 Figure 4 shows how both the stringency of response ramped up (left-hand chart), and lock-downs ramped up from the second week of March. These charts illustrate the uniformity of response for a similar selection of Asian and sub-Saharan African countries that were shown in Figure 1 and Figure 2, above.

While lock-downs are uniform, the timing relative to the pandemic, and the reasons for them, have varied. The lesson from the range of experience across Europe seems to be that the earlier a lock-down was imposed the quicker the rate of infection was brought under control. Other countries, including many of those in sub-Saharan Africa went early, when case numbers were still low. The numbers of deaths recorded in such countries remains low – quite possibly as a result.

It is also the case that if most other countries in a region are responding with a lock-down, the political risks faced by those making a lock-down decision are one-way: if there is no lock-down and then high rates of deaths, the government will be blamed. If there is a lock-down and few deaths, then it is clearly justified – after the event.

But while few have been infected by the virus, perhaps because of lock-down, nearly everyone has been affected by a lock-down. It has a broad impact on lives, and hits more vulnerable people hardest.

Lock-downs work to stop infection by sharply limiting movement of people and interaction among people. For those reasons they also sharply slow economic activities. That hits households because people can’t earn a living. It also hits the public finances because taxes drop sharply during a lock-down – there isn’t much income or expenditure to tax – just as emergency demands on public spending go up – especially for social protection from the impact of the lock-down.

This means that governments now face a new and tougher challenge: how to release a lock-down in a way that allows people to re-start their lives and get the economy going – while still keeping rates of infection low. Otherwise the risk is that lock-downs only post-pone the virus rather than slowing or stopping it.

Either way, the big legacy of the lock-down is a crisis in the public finances. Not just that tax receipts drop during the weeks when people are not working, but that there is also a medium-term problem when it takes time for economy activity, and so tax receipts, to recover. This is an economic and social crisis, not just a health crisis.

Read our Chief Economist’s full paper on the impact of COVID-19 on low- and middle-income countries here.

Office of the Chief Economist