How Pakistan could save over $1 billion annually on fuel and operating costs, while reducing greenhouse gas emissions.

Through more efficient utilisation of its power generation options Pakistan could save over $1 billion annually on fuel and operating costs, while reducing greenhouse gas emissions and readying the country for a transition to variable renewable technologies like wind and solar. These were the findings of a recent research project delivered by the World Bank’s Energy Sector Management Assistance Program (ESMAP) as part of the OPM-led Energy and Economic Growth (EEG) programme.

The choice of which power plants to operate (or dispatch) to meet electricity demand at any given time has substantial financial implications for the overall cost of electricity. Construction costs vary by technology, but once these initial costs have been incurred, operating power plants that burn fuel – coal, natural gas, heavy fuel oil (HFO), nuclear and biomass – tends to cost more than operating those that rely on renewable energy – wind, solar and hydropower.

Dispatch decisions and their consequences

In the absence of a wholesale electricity market, the decision on which power plants to dispatch and when, is made by the grid operator. Grid operators in many developing and emerging markets rely unnecessarily on expensive generation, for example, from power plants that burn heavy fuel oil (HFO) and diesel, at the expense of cheaper options. Sometimes this is the result of poorly structured contracts that require a minimum level of generation and capacity payments to emergency power producers regardless of their output. Other times inefficiencies result from poorly designed or followed dispatch protocol, transmission constraints or a lack of technical capacity among grid operators.

The financial implications of inefficient dispatch decisions can be substantial. A previous study by ESMAP showed that Bangladesh could save over a billion dollars per year by reducing unnecessary reliance on expensive power generated by HFO, and utilising available domestic gas more efficiently.

Improving utilisation of the power network will also be a critical step in increasing the proportion of electricity produced by wind and solar power. The power system must have enough flexibility to accommodate drops in output due to clouds or a lack of wind. One way to build in this flexibility is through spinning reserves, i.e. power plants connected to the system that can be dispatched quickly, like natural gas and hydropower.

Measuring the efficiency of dispatch practices

The EEG project led by ESMAP, Planning for dispatch efficiency, is conducting a health check of dispatch practices in Pakistan and Nigeria. For each country, the team developed an optimisation model that retrospectively calculated the most cost-effective mix of power plants to meet demand in each hour over the course of a year. The model takes into account the constraints each system faced, including contractual obligations to power producers.

The optimised scenario acts as an efficient benchmark against which to compare actual dispatch practices. Where the actual practices differ significantly from the efficient benchmark, the model is able to pinpoint where excess generation occurred from expensive power plants and where cheaper ones were under-utilised. The Pakistan component of the project was recently completed, and the results are published here.

The team found that in 2018/19 Pakistan could have saved $1.032 billion, or 17.8% of variable annual costs of electricity supply, through more efficient dispatch practices. In the optimised scenario, Pakistan would have generated 98% less electricity from steam turbines (STs) and 100% less from its combustion engines running on expensive fuel. This electricity could have been generated more efficiently through increased utilisation of Pakistan’s combined cycle gas turbines (CCGT), coal power plants (CPP) and variable renewable energy (VRE) (see figure 1).

Figure 1: Comparison of 2018/19 actual and modelled generation by generation technology* 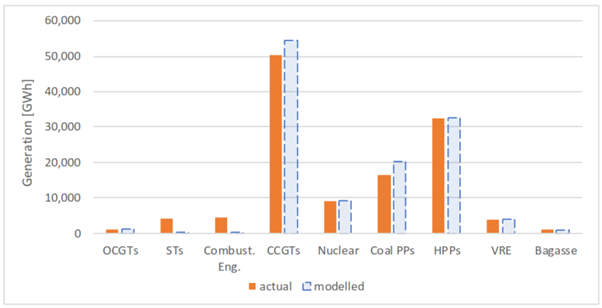 The optimal scenario would not only have saved Pakistan money, it would have reduced greenhouse gas emissions. While STs can generate steam through a variety of different fuels (natural gas, coal, biomass or solid waste), combustion engines burn HFO. Counterintuitively, despite an increased use of coal, the optimal scenario shows a reduction in CO2 emissions of 1.4%, or 0.6 million tonnes, due the nation’s reliance on particularly inefficient HFO plants.

Having identified these inefficiencies, the study explored the underlying causes and identified some potential remedial measures.

Key findings included inefficiencies being caused by many of Pakistan’s power plants still needing to be manually operated. These plants are often operating on historic dispatch schedules, rather than a schedule aimed at minimising overall system-level costs. Computer-based Automated Generation Control (rather than manual) would enable grid operators to make more timely and cost-effective decisions on which power plants to operate.

What’s more, the study found that a lack of transmission capacity between regions often prevented the system operators from meeting demand using the most cost-effective mix of power plants. Wind power, in particular, was frequently curtailed, when it would have been a cost-effective choice had there been more transmission capacity. Improving the capacity of the transmission network would help Pakistan overcome grid congestion and enable more efficient outcomes.

How can Pakistan and other countries ready themselves for renewables?

In addition, the team explored the measures that would be required for Pakistan’s power system to accommodate a significant increase of variable wind and solar. It found that the ramp rates of Pakistan’s power plants, i.e. the speed at which they can be dispatched, are not up to international standards. To support a transition to renewable energy, the team recommended that Pakistan focus on building flexibility into the system through power plants with quicker ramp rates, batteries and power purchase agreements that enable, rather than restrict, flexible utilisation.

These findings have relevance to countries beyond Pakistan that aim to integrate more wind and solar power going forward. By taking steps today to build much-needed flexibility into their power systems, countries can lay the groundwork for a rapid transition to renewable energy without jeopardising system reliability.

By Ryan Hogarth and Debabrata Chattopadhyay

Oxford Policy Management leads the Applied Research Programme on Energy and Economic Growth, which is funded by UK aid.