As demographics change, particularly in lower-income countries, how can policies best recognise the role of energy?

Over the next 30 years, population growth will be almost entirely concentrated in urban areas in lower-income countries. Current thinking regarding sustainable cities tends to focus on the problems of the world’s largest urban agglomerations – both higher- and lower-income countries. However, second-tier cities and smaller urban settlements in Africa and Asia are also growing very quickly. The majority of all urban dwellers will actually reside in smaller urban centres in the future.

So the world is urbanising and cities continue to grow. The fastest urbanising countries are diverse in nature and include the likes of Burundi, Eritrea, Ethiopia, Kenya, Madagascar, Afghanistan, Bangladesh, Bhutan, the Maldives, and Nepal. Despite a levelling-off of China’s national population growth, many of the country’s cities still continue to grow due to ongoing urbanisation.

From 2025 onwards, reliable forecasts (from the United Nations and others) show that future urban growth will be dominated strongly by African cities, as the chart below shows. 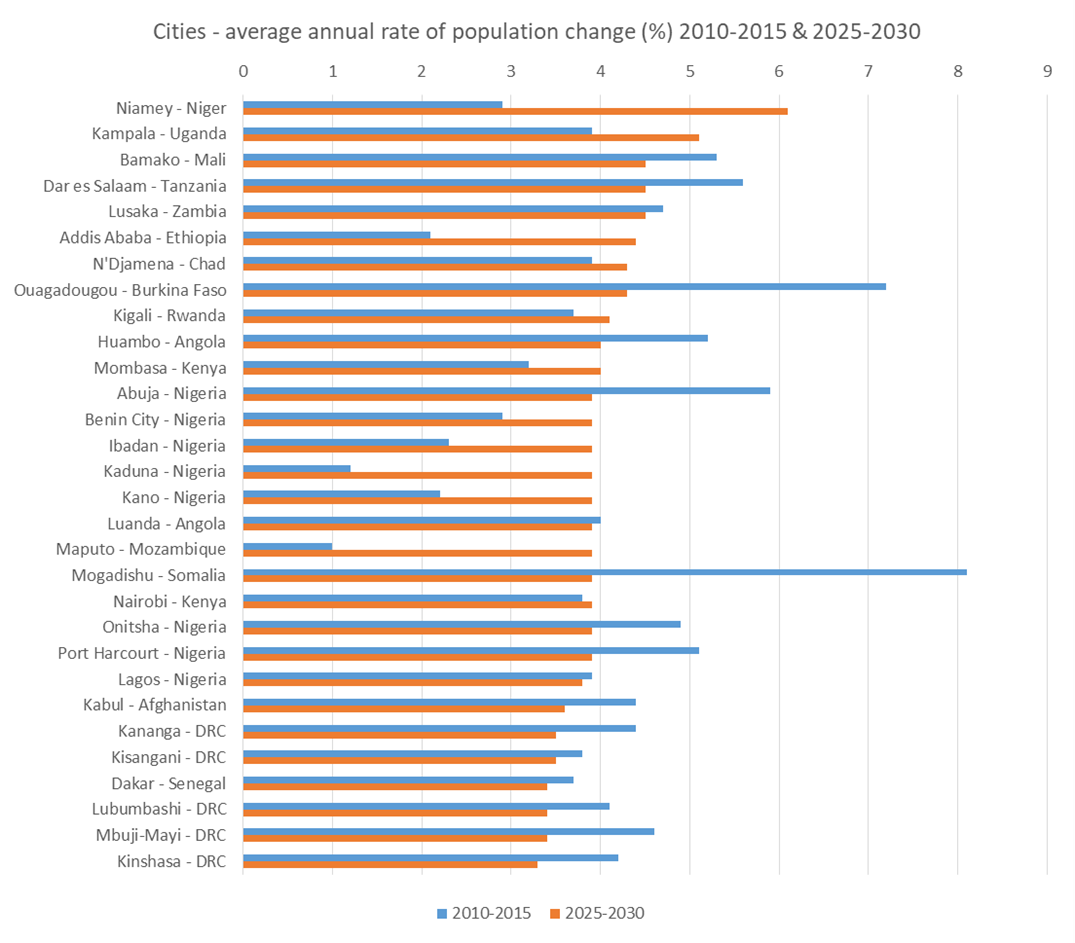 It is low-income African cities, therefore, that will have the most pressing needs in development terms. Their populations will continue to increase due to internal movement from rural areas, but also large-scale migration from outside of the country. This migration can be due to numerous factors including perceived economic opportunities, the impacts of severe natural disaster, food and water shortages, and conflict. Many African countries face a dual challenge of rapid urbanisation alongside the huge pressures of accommodating substantial displaced populations.

African cities, in particular, already experience many challenges and serious structural weaknesses in their urban areas. These include limited infrastructure that is often outdated, overused, and not invested in properly, constrained housing supply, and poor utilities and services provision. Of the latter, provision of reliable energy and water resources are key to achieving any kind of quality of life, as well as being fundamental to labour market participation and basic levels of economic growth and productivity. As populations change rapidly, these factors become ever more pressing and new approaches need to be found both in terms of designing solutions and in funding them.

In particular, for sustainable urban development, there is a need to address rising energy demand alongside existing energy poverty. Simultaneously, there are clearly priorities for all cities to reduce carbon emissions and adapt to climate change. These priorities often push policymakers in opposing directions.

One of the consequences of rapid population growth is that cities often physically grow – sometimes through development of large-scale informal settlements – at a much faster rate than any form of statutory utilities or services provision can keep up with. This means that, to some extent, communities have to find ways to provide for themselves organisationally and in terms of some basic utilities. It is within this, as well as more formal contexts, that a variety of decentralised and local energy systems can potentially be deployed in urban areas.

Smaller scale and decentralised urban scale energy projects will have a critical role to play in sustainable utilities provision, partly as a practical step in supporting or supplementing larger grid-based systems as they are rolled out, but also as a key mechanism in moving these cities towards clean, renewable energy and reducing emissions.

Two specific types of local energy generation schemes may be of particular relevance. The first of these is anaerobic digestion, which involves biodegradable waste being decomposed in the absence of oxygen to produce a methane-rich biogas. The biogas can be combusted to produce both heat and electricity, while biogas production can also produce a fertilizer.

This is an important form of potentially new, sustainable energy supply, as the volume of waste generated in cities in lower-income countries will inevitably increase substantially as their populations grow.  There is also a key element around behaviour change and a need for households – formal and informal - to alter their patterns of behaviour and learn to manage and store this waste properly in order to enable effective collection. The relevant forms of waste must be clearly identified and separated, disposed of, collected, and utilised effectively. This requires a challenging combination of information and communication, efficient municipal or local collection, and application of appropriate technologies to ensure effective, clean energy generation.

There are a number of possible co-benefits in pursuing anaerobic digestion as a local urban project. Waste collection in rapidly growing urban areas can provide an effective basis for establishment of new enterprises and local businesses, either emerging naturally or through a deliberately designed policy. The overall impact involves increased energy supply from renewable sources, plus an overall enhancement of local economic and community capability. In an urban context where processes have to be managed and organised on a practical level, the opportunities for these forms of policy and delivery linkage should always be considered.

Another tried and tested opportunity for local, decentralised energy generation comes through use of solar power. Solar photovoltaic power has grown quickly in use in many growing urban areas. Ongoing advances in technology alongside mass production processes in certain regions of the world, particularly China, continue to reduce the overall cost of solar power as an energy source.

Solar power has an obvious application to urban areas, as solar panels and photovoltaic materials can be mounted on roofs and other parts of buildings. As urban areas grow and concentrated development takes place, the scale of physical opportunity to deploy solar panels also grows in parallel – though there may be complications regarding building type and ownership. Furthermore, this process requires organisation and coordination – and often funding - at the municipal level, as well as transparent information about both the costs and benefits of solar power to households and businesses. The cost-benefit trade off of solar panels – as well as the emissions reduction impact – is something that may only be truly apparent in the medium to long term, and residential populations in cities are often transient, which can prove an obstacle to this form of power.

Looking to the future

Urban growth in the low-income world presents many challenges, some of which are around provision of infrastructure, energy, water, and housing, as well as public services. However, it is also important that evolving communities in these places become stable and sustainable. This requires a very strategic urban scale approach to both physical and economic planning, in order to understand how existing and emerging communities and the districts that host them are connected to each other and how they relate to one another other, economically and socially. It is within this context that local and decentralised energy projects can best be taken forward and where a degree of continuity, consistency, and long-term investment can take place.

There is clearly much more that to be done to fully understand the policy environment in order to provide a sound basis for urban energy projects. A combination of technological advances and behaviour change are necessary to achieve the decoupling of economic growth, energy use, and carbon emissions that is beginning to be seen in higher-income countries, while new data is emerging which demonstrates a complex but significant relationship between urban form and energy consumption.

This means it is imperative that cities plan properly and these plans must encompass a range of things simultaneously: housing, infrastructure – including energy and water use – and economic development, primarily job creation. A balance between the capability of municipal authorities to manage this process, alongside community- or district-level expertise, will help to build in much-needed resilience to urban energy provision.