Faced with the prospect of Chinese, Italian or even worse impacts from the Covid 19 pandemic, most governments are preparing or implementing a mix of healthcare and public healthcare measures to limit its impact. It should be routine to examine the options and consider their net impact over the life of the epidemic, which involves looking at their impact in a model, typically based on the SIR epi’ model exemplified by Tomas Pueyo, “The Hammer and the Dance”.

This disease and the public health responses will create very significant economic disruption. In countries with large informal sectors (often up to 80-95% of the workforce in Africa and South Asia), social assistance programmes such as cash transfers and other types of social protection could play an integral part in mitigating the immediate economic impact of social distancing policies such as “lockdowns”. However, many of the usual ways of implementing these sorts of social protection programmes would risk undermining these public health measures – through the manual way in which new registrations or payments are made. Equally, social protection programmes can be designed to promote and incentivise behavioural changes and could potentially reinforce social distancing public health measures.

At OPM we have extensive experience of researching, implementing and evaluating shock-responsive social protection, conditional cash transfers and other forms of social protection. And therefore also have deep contextual knowledge of the potential benefits and risks that could arise from the interaction of social protection and public health measures in different settings. Because of the interaction between social protection and public health, it makes sense to model the options together, in a SIR-based epi’ model that also estimates costs and economic impact. Use of hypothetical examples in the modelling clearly shows that the merits of different strategies are very sensitive to local characteristics affecting the epidemic: environmental, demographic, social and institutional factors. The model also clearly illustrates that social protection which reinforces public health measures, rather than undermines them, could be the difference between success and failure in some contexts. Success depends upon country-specific planning, rather than global options or North versus South options.

Below are some key insights identified when we investigate the interactions of health, public health and social protection options on the epidemic itself, as well as on costs and economic impacts.

The potential impact of integrating social protection and public health measures can be assessed by including the social protection measures in a model of the health and economic impacts of the epidemic.  Some possibilities are illustrated for a hypothetical country with very few intensive care units and less than 1% of the population over 70.

Social Distancing options with and without Social Protection

This graph shows days since the first infection on the X-axis, number of infections per thousand people on the left Y-axis, and a measure of workers’ incomes on the right Y-axis.

The graph shows a base case and the progress of infections with three options.  The first option is “light public health” which involves campaigns over handwashing, and light social distancing, but no “lock down”, which manage to produce a 16.5% reduction in transmission.  This effort is kept up through 200 days and by the end, mortality is reduced to 0.2% from 0.27%.  Note that the relatively youthful population means base-case mortality is much lower than in a European country like Italy.  The “Full Economic Cost per Life Saved” of the light public health option is negative – it is so cost effective that it reduces lost output by considerably more than the cost of the public health interventions themselves, as well as saving lives.

The second option is heavy social distancing or “heavy public health”, in which 60% of the population is effectively locked down from days 30-70.  This radically interrupts transmission and “flattens the curve”.  However, the infections come back later and because there is so little intensive healthcare, mortality is only brought down to 0.18%.  The cost of the economic disruption is significant, with cost per life saved at 17.8 years of GDP per capita.  This is not the cost effectiveness of adding heavy social distancing, but rather, the cost of the combined light and heavy measures.  On its own the heavy social distancing would cost 60.8 years of GDP per capita per life saved.  Part of this will be felt as poverty impact since the incomes of workers are depressed by 60% during the lockdown.

The third option includes heavy social distancing and also social protection for those unable to work due to the public health policies.  This succeeds in mitigating the poverty impact of the epidemic (i.e. as caused by the heavy social distancing).  However, in this example the registration procedures and payments under the scheme partially undermine the lock down’s impact on transmission, seen by the dark orange infections curve being less flattened than the curve without social protection.  In this example, the ultimate impact on mortality is quite limited, but there is an increase in economic cost to 20.2 years of GDP per capita per life saved.  This does not include the financial cost of the social protection transfers, which are both a cost and a benefit.  Therefore the main extra cost is the set up costs of the social protection scheme.  The scheme largely removes the poverty impact of the social distancing scheme. 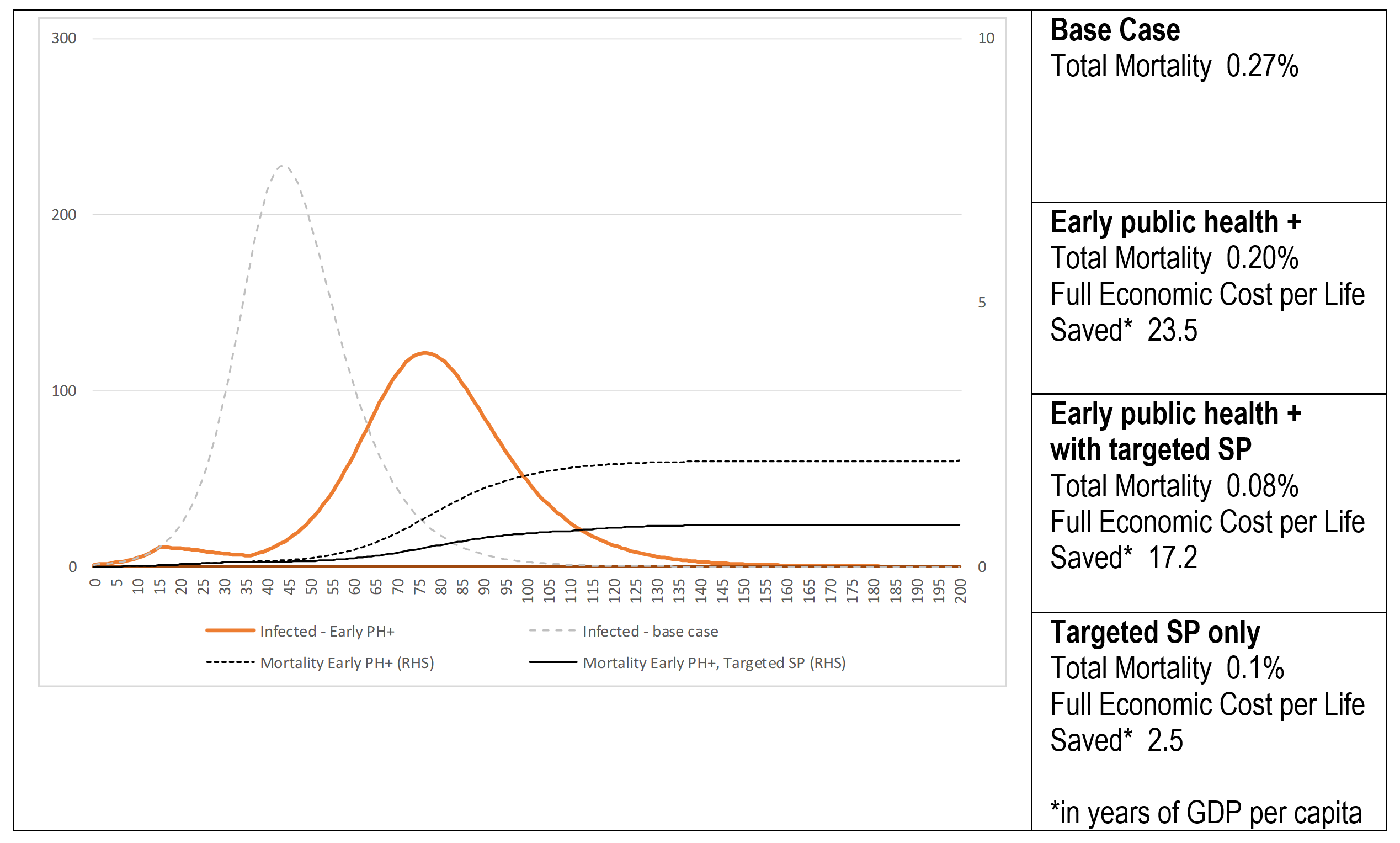 Here, the base case is the same as before, but the heavy social distancing strategy is different because it takes place very early, in days 15-35, aiming at “flattening” the epidemic before it has really begun.  In the first option, “Early public health +”, this is followed up with the light public health measures from before.  The combination succeeds in reducing infections to very low levels up to day 35.  After that, the light measures do not work any better than without the early social distancing.  This is actually less cost-effective than the heavy socially distancing in the previous model.  Of course, this is the result of the way these measures are modelled – e.g. perhaps a different design would be more effective at keeping transmission down.

The second option recruits targeted social protection to reinforce public health measures for vulnerable groups – the over 70s.  The net effect is to reduce mortality even further, from 0.2% to 0.08% of infections, because the key vulnerable group is being protected from infection as protective behaviours are being reinforced by an expansion of pensions linked to those behaviours.  The targeted social protection is low cost because the over 70s are such a small group, 0.9% of the population.  But it has a pronounced effect on mortality which comes down to 0.08%.  The cost per life saved is just 17.2 years of GDP per capita.

In fact, the targeted social protection without the early social distancing saves almost as many lives at a cost of 2.5 years of GDP per capita per life saved.  Infections follow almost the same profile as the base case – but of course they are missing the crucial over 70s.

The hypothetical examples simply demonstrate the interaction of health, public health and social protection measures on the epidemic and its costs and economic impacts. What is important is not the precise magnitude of the numbers, but rather the way in which they illustrate that it is crucial to design complimentary policy interventions, that simultaneously impact objectives in the areas of public health, poverty and the economy in a positive direction.