DFID is assisting the Government of Chhattisgarh to identify and promote climate-smart agricultural practices to develop the drought resilience of farming communities in the region.

Sambati Kashyap, a 50-year-old woman, walks 4 km to a stream every day to fetch drinking water for her family. There is a handpump in her village but it gushes red-coloured water, contaminated by iron, which makes it unfit for drinking. It can be used only for household washing and cleaning.

She fears for her only source of drinking water: ‘The stream should not be dry.’

Water shortages are not restricted to her family alone. They affect the entire Maria tribe in Mandawa village. This farming community has traditionally supported itself through paddy cultivation across the two agricultural seasons rabi (non-rainy) and kharif (monsoon). However, the changing climate is squeezing their source of livelihood, as farmers are unable to sow during the non-rainy season as a result of a lack of water. Some farmers use tube wells for irrigation but this approach is not sustainable during droughts, when the groundwater table is treacherously low.

‘Annual rainfall has decreased from 1,600–1,400 mm to 1,400–1,200 mm,’ says Gopikrishn Das, Head of the Department of Agrometeorology of Indira Gandhi Agriculture University. He adds, ‘Earlier there would be rainfall for 80–90 days, now it gets wrapped up in 65 days. The amount of water and the number of days of rain are both less.’

Changes in rainfall patterns have led to the observation of more frequent and intense periods of droughts. Some areas of the state are already seeing depletion in the levels of groundwater as a result of over-extraction of groundwater and a decrease in its recharge as a result of erratic rainfall. In 2015, 15 of the 27 districts in Chhattisgarh were declared as drought-affected.

The effects are being felt on the ground: ‘I have never seen this water stream get dried even in summers but from the past two years the amount of water flow has decreased. If it dries, we may have to migrate with our whole family to the nearby city during summers with no one to look after our land, cattle and house,’ says Sambati.

Migration has increased in the past four or five years as a result of high risk and losses in agriculture. As many as 95,000 people in Chhattisgarh have already left their homes in the past three years in search of a livelihood because of the increasing level of insecurity in agricultural production and the lack of alternative livelihoods in rural areas. With men mostly going to the cities to look for work in labouring, women bear the additional responsibility of household, field and cattle protection. Additionally, increased temperatures have made working conditions tougher for women, who perform most of the agricultural labour.

Focus group discussions with women farmers and agricultural labourers from three different agricultural climatic zones indicated that increased weed and pest attacks in the past four or five years in fields and on horticultural crops had led to a need for increased levels of plant protection, which is mostly provided by women. Weed growth has increased as a result of irregular rainfall – and women are held responsible for weeding. This increased time in the field has an adverse impact on their health and the well-being of their family.

In 2012, the Government of Chhattisgarh held a wide stakeholder consultation to develop a State Action Plan on Climate Change, which revealed a need for more studies on the impact of climate change on agriculture. The Agriculture Department asked ACT to investigate the linkages. To this end, ACT has completed a scoping study to identify the local impacts of climate variability and extreme events on agriculture, documenting local innovation and coping mechanisms in the highly vulnerable cropping systems of Chhattisgarh. 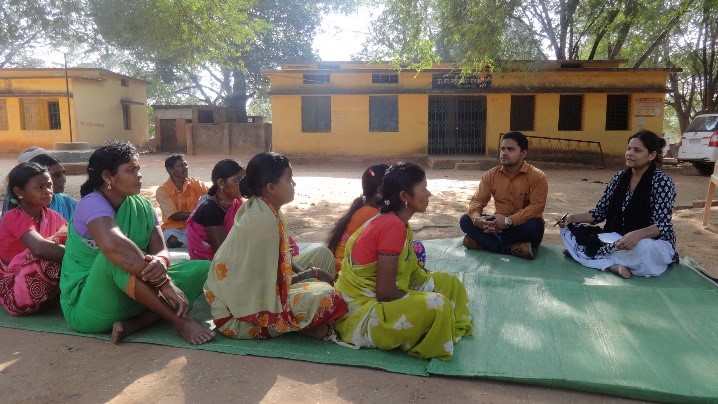 ACT Chhattisgarh team speaking to locals about their challenges.

The study confirms that climate factors are affecting agricultural production in the state and underlines the need for a climate-smart approach. A climate-smart approach essentially means that, after having identified vulnerabilities, measures should be formulated and implemented to enhance resilience to both short-term climate variability/extremes and long-term change.

The ACT study adopted a highly participatory approach, and it identifies adaptation strategies developed by farmers and communities themselves. For example, farmers are increasingly adopting shorter-duration, hybrid varieties to deal with reduced monsoon duration. They are also resorting to planting or mixing High Yielding Varieties (HYVs) with desi varieties, which may show more resilience to drought. Women report that kodo kutki – traditional millet varieties – are more resilient to temperature variations, and its ability to grow with less water makes it a good crop to rely on in years of drought.

The Government of Chhattisgarh has implemented several strategies to enhance resilience. For example, it has launched weather-based crop insurance schemes in 27 districts to provide financial coverage from losses resulting from poor rainfall. Farmers are now trained on improved agricultural practices and connected to weather forecast services on SMS. Weather stations are also being installed in remote locations for better local weather forecasts. These forecasts will alert farmers about weather changes and enable them to take measures to minimise crop damage. Recorded data from these stations may also be used to develop crop insurance for farmers. These are a step in the right direction.

This study reveals that households that rely on agriculture, and for which the large part, or all, of income comes from farming, are the most vulnerable to climate change. It highlights the community-led response to the changing climate in Chhattisgarh and makes a case for its upscaling. At the same time, it showcases the new scientific opportunities that farmers can tap to build their resilience. Overall, it sets up a policy roadmap that Chhattisgarh can follow toward a more resilient future.

This article was previously published by ACT in On the Frontiers of Climate Change. Find out more about ACT's work.

5 lessons from the Action on Climate Today programme