Low-income countries in Africa face a long hard road to recovery. The UK could catalyse and lead global support and change the future for developing countries.

After the pandemic low-income countries in Africa face a long hard road to recovery. The UK could catalyse and lead global support, change the future for developing countries, and strengthen UK soft power in the national interest.

Beyond the health and humanitarian impact, the combination of pandemic, lockdowns, and the international recession will initially hit consumption in low-income countries in Africa by as much as one third. This estimate, from our detailed modelling, has already been reflected in the drop in earnings in Kenya (here).[1] There will also be a hit to public finances, meaning tax rises and spending cuts of up to 10% of GDP. Restoring fiscal balance is key for economic recovery. 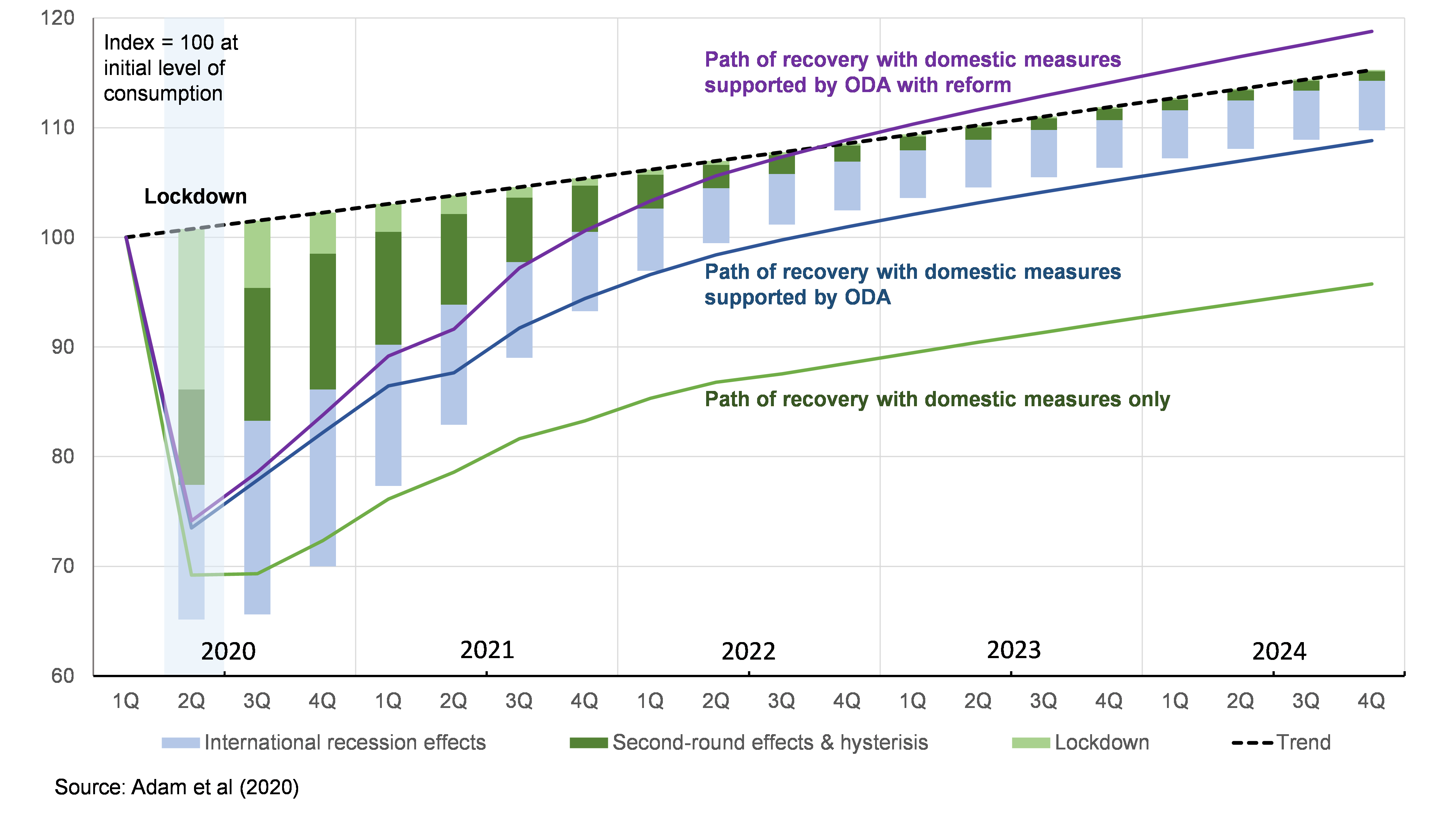 Recovery would be strengthened by domestic reforms: to strengthen systems for tax collection and public spending. But all domestic policy choices facing low-income governments are grim: they cannot do ‘whatever it takes’. As put by the UK Secretary of State for the Department for International Development: low-income countries in Africa face a long and hard road to recovery.

International support, principally ‘Official Development Assistance’ (ODA) which would be anti-cyclical and short-term, would also accelerate recovery. Exceptional finance widens ‘fiscal space’, so that immediate policy choices are less awful; it relieves the need to raise taxes and cut spending, such as on social protection, health, and maintaining infrastructure – and it makes space for reform. Our modelling shows that if international finance is combined with reform, consumption could return to trend within three years; it would also sustain faster growth, and quicker poverty reduction (Figure 1).

To deliver, catalyse, or leverage international financing at scale, and to support feasible effective reform, is in the UK foreign policy and national interest:

We estimate that the additional international support needed to stabilise the fiscal position and accelerate recovery in low-income countries in sub-Saharan Africa is US$40-50 billion. The IMF estimate in this Op-Ed that an additional $44 billion is needed.

It is small, in global terms. US$40-50 billion is less than 0.5% of the now US$10 trillion being spent to combat the pandemic in G20 countries.[5] It is an increase of 29% in annual ODA. Debt relief since the turn of the century gives a precedent for this scale-up. We estimate the return on this financing in terms of accelerated gains in growth and consumption to be as much as 25%: it offers exceptional development value for money.

For the UK, this is an opportunity to take global leadership because what is needed is too much for any one bilateral donor budget to support. The UK has a track record in catalysing and leading multilateral coordination – it doesn’t have to be left to a multilateral, such as the World Bank.[6]

There is a risk to UK global interests that this moment is seized upon by the European Union as their opportunity to establish a new role as the coordinator of bilateral donors – as has been suggested by Germany.

In addition, central to UK leadership is that UK ODA has been pre-eminent in sophistication and effectiveness in impact and delivery – especially in technical support for reform.[7]

It is in the UK national interest to catalyse international support. The next question is: how could it be delivered? These are some of the opportunities for leadership:

The UK has an opportunity to project soft power and establish a new global role: catalysing and leading global support for low-income countries in sub-Saharan Africa will accelerate recovery from the devastation to growth, trade, and poverty that is being unleashed by the pandemic, lockdowns, and the global recession.

[1] Our detailed modelling has a rigorous estimate of the depth of recession and pathways to recovery: Adam, Henstridge, and Lee (2020) “After the lockdown: Macroeconomic adjustment to the Covid-19 pandemic in Sub-Saharan Africa”, Oxford Review of Economic Policy, forthcoming. DOI: 10.1093/oxrep/graa023 .

[3] See for example this in The Economist: https://www.economist.com/special-report/2020/03/26/africa-is-changing-so-rapidly-it-is-becoming-hard-to-ignore

[4] For a view on the political leadership, see: https://www.chathamhouse.org/expert/comment/getting-most-uk-aid-needs-political-leadership#

[5] ~The IMF has tracked that total here; the latest update comes from the IMF Managing Director here.

[7] How ODA should be delivered to support effective reform will be the subject of a separate note.

Office of the Chief Economist